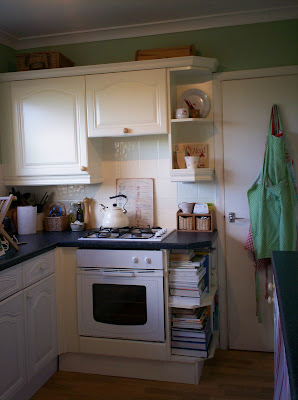 Slowly, slowly the dreadful kitchen is turning into one of my favourite places to be at home. 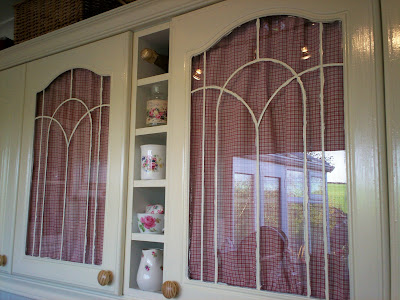 The walls have gone from gaudy, canary yellow to soft, sagey green. The cupboards are now cream with wooden handles instead of gold with a typical '80s grey trim. The stalwart of the thrify makeover (yes tile paint!) has turned the yucky navy & white tiles to calming ivory. 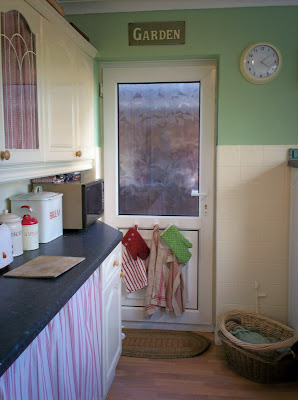 The new floor has transformed the room the most, goodbye grim navy lino and hello to a bargain remnant. Not bad for me, half an hour's grappling and Grandma Alice's old butter knife to help slide it under the cupboards! My thrifty kitchen revamp came in at a bargain £130, with most of the money going on a new sink and the floor. Still a bit more painting and the new work tops to fit (which were going begging at dad's firm!) but it's almost there. 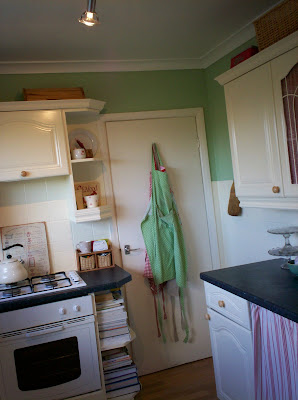 I've used the curtains that hung in the laundry at our old house to line the glass doors, make a curtain to hide the dishwasher and the mess of recylcing and some old bamboo blinds with a vintage trim will be going up at the windows. It'll do us for a few years and I'm really looking forward to rustling up lunch for our friends who are coming to stay this weekend in our cosy new kitchen.
The view from our kitchen window was wonderful this week. 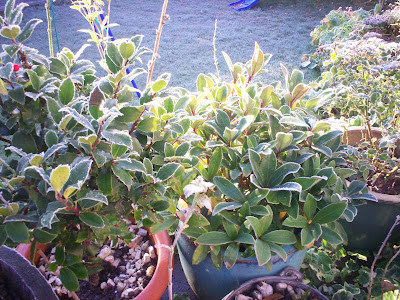 Frost sparkeld across the garden and the view has really opened out across the hills as the leaves fall. 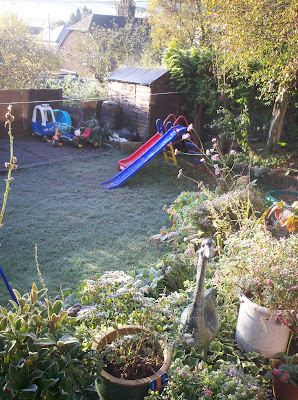 The boys and I enjoyed a half-term pyjama day, far too cold to go out for my two laid up with colds. So we turfed out toy boxes, sorted out jumble and snuggled up on the vintage sofa to watch the snow fall and the garden birds flock back to our bird table. 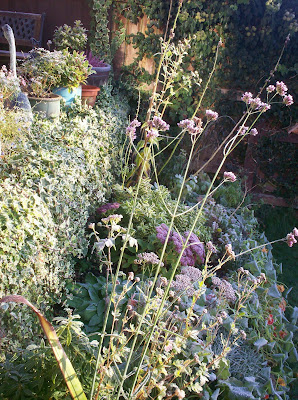 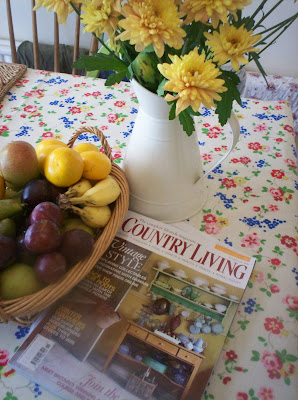 The Year Has Turned 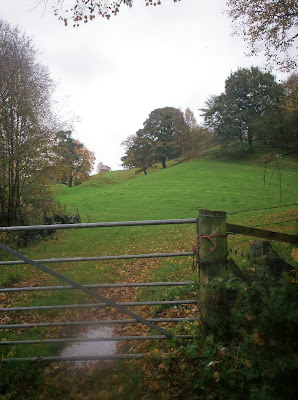 Edited to add some pictures from our drive to school after last night's lashing of rain. Just my sort of day!

There's something so wonderful about this time of year. 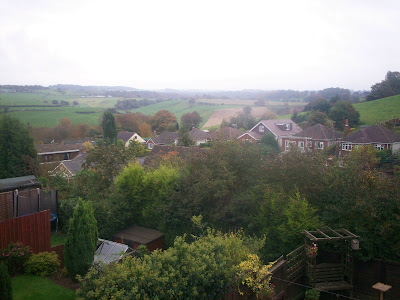 Ordinarily I'm not the type of person who's wild about change (if it was up to me I'd always go back to the same place for our holidays) but every day at the moment there are changes to see and it's so exciting. 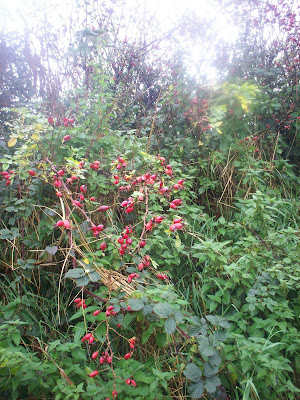 Today I noticed everywhere borders of vivid orange against the wet black tarmac on our way to school. Seeing the leaves whirl behind us when we whizzed past in the car was a thrill. 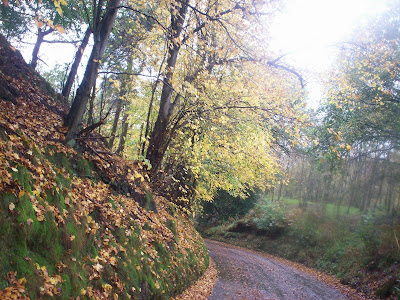 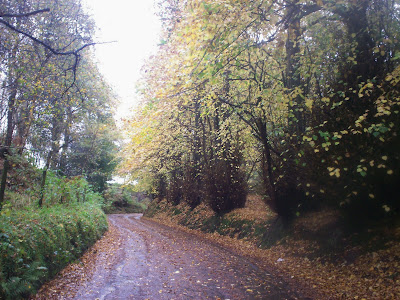 Anticipation is the feeling that describes autumn for me, tinged with a teeny bit of fear, just like when you know a thunderstorm is on the way.
(Not exactly the full Country Living version but our little nature tray is brim full of autumn treasure). 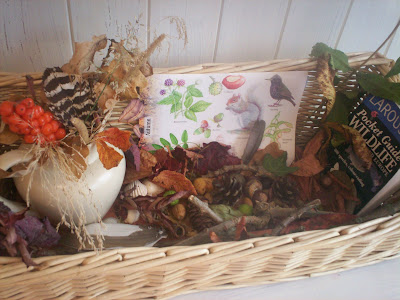 Thankfully the weather is rarely that severe here, so I can look forward to winter and the changes it brings. 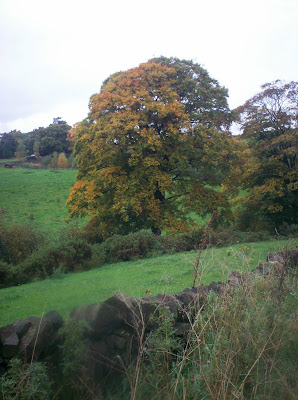 It's been mild and calm for a while, I'm ready for a gale now that'll thrash the treetops, roar the clouds down the valley and rattle and whistle around the eaves. Not for days on end of course but I do love a bit of dramatic weather every now and again! 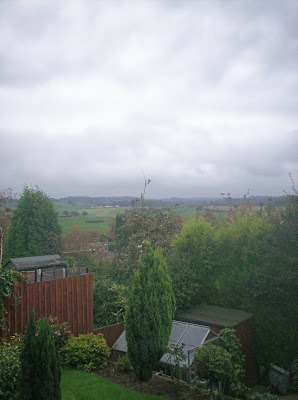 (The view over my neighbours garden and a Magic Apple Tree) Our garden's throwing a final fling. I'm quite enjoying this bright clash of purple asters and satsuma orange nasturtiums. The view down the garden has changed, speckles of fading birch leaves dot the lawn and woodsmoke curls across us from the house below. 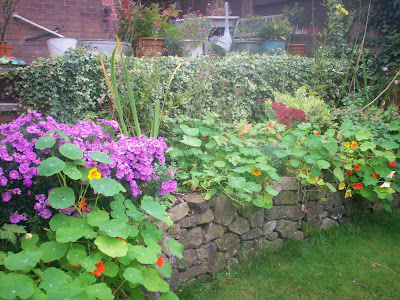 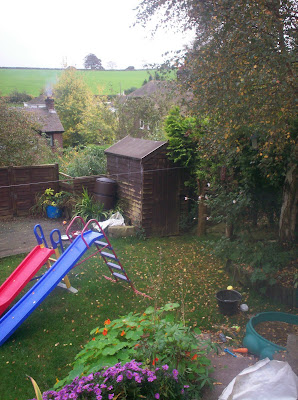 Winter is on the way and we're getting ready to batten down the hatches before it strikes - yippee! 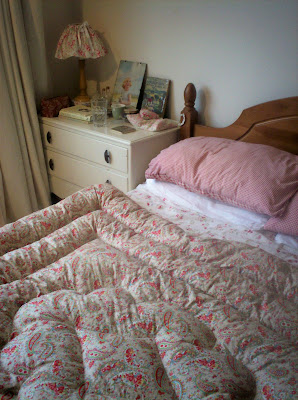 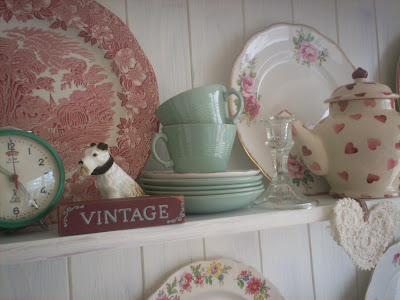 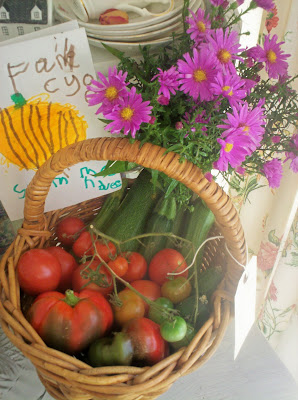 Life is rushing by and before I really noticed, here we are hurtling into autumn. Today was the school harvest service and it seems we were the only house in the entire village not to realise that harvest isn't about bringing along a portion of your best produce anymore. 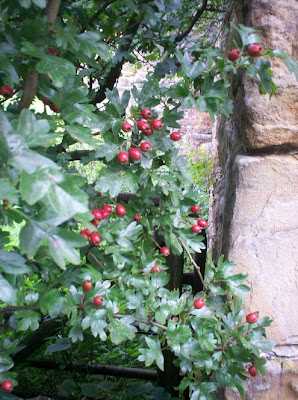 Yes we have no bananas, tomatoes, marrows, loaves of bread or anything else you can eat apparently at the harvest service, gifts of cash for a very deserving charity working in Africa are much preferred. Now of course I don't mind this at all but it felt like something was missing, which it was. No wheat sheaf shaped loaves, no pumpkins and marrows lining the window sills, no shoe boxes brimming with runner beans, giant cooking apples or jars of jam. Someone said that too many out-of-date tins and packets of broken biscuits were being sent in and it was too risky to hand them onto anyone these days. Living in a rural community I can't help feeling it's a shame we no longer physically celebrate having a link with the land. 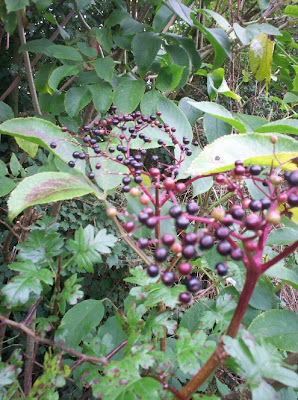 B trooped in though with a beaming smile and his basket of the half dozen cherry tomatoes I managed to rescue before the blight really took hold, some much beefier toms donated from a friend's allotment, along with prickly cucumbers, courgettes and peppers and a bunch of the traditional Michaelmas daises from our garden. I had a mixture of pride and embarrassment seeing him walk into church as the only child in school with produce to offer (btw he did tell me he'd been told it was fine to take some "Can I take some fruit and vegetables to church next week mummy?" Do you think I'm reading too much Country Living and it's wearing off on him?!)

His basket is sitting proudly on the altar now so I don't suppose it was a big problem but I'm a bit sad that it's the only one.
So as the year turns I'm thinking of making lists of things to make, places to find a smashing little something for someone and building up the anticipation to my most favourite time of the year. Look what I found, a treasure for Christmas by Susan Hill who's rapidly become one of my favourite writers. Just these opening lines are enough to make me want to get out the decorations!
Snow always fell on Christmas Eve,
fat and soft as goose feathers, like a quilt on the ground for weeks of the winter.
I'm fighting the urge to devour it though and I'm going to save this special little book for the weekend before Christmas when I'll light the fire, snuggle up with a steaming mug of something and enjoy. Can't wait.
Posted by Curlew Country at Friday, October 03, 2008 22 comments: