And Away We Went 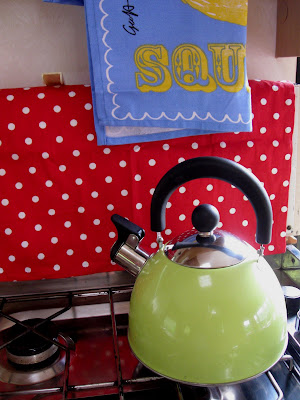 Finally - after the repairs, the saving up and all that rain, we've acutally spent a night away in our little caravan and it was ever so much fun. Ok, maybe there were a few teething problems (losing things, no water, no gas!) but on the whole we have fallen in love with our little bav (what the Woodhouses have always called caravans apparently-?). 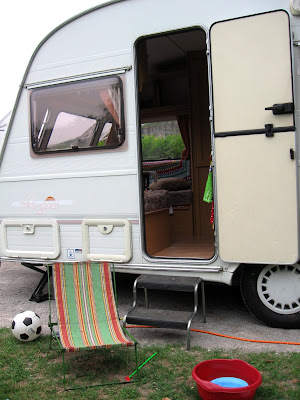 Getting it off our steep drive and simply hitching up was the biggest achievement to be honest so we didn't venture too far and headed for a nice little site in an old Peak District quarry to enjoy a hazy summer's afternoon. 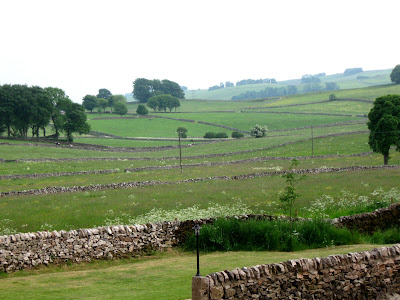 It wasn't a bad site but the lack of views from the pitches (we were tucked under the huge quarry walls in a dip) made it feel a bit claustrophobic and to be honest I'm with Lucy; a farmer's field would be much more up our street. 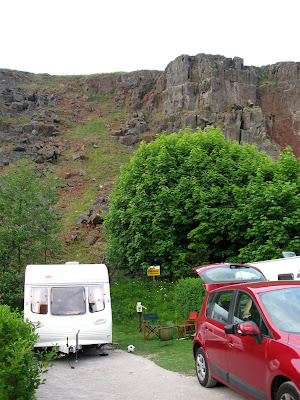 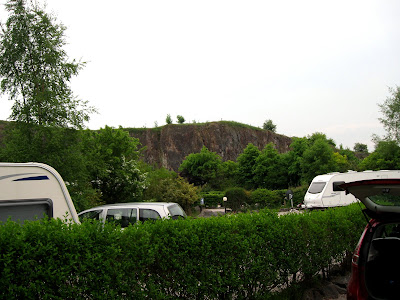 Mind you it was in one of the best parts of the White Peak and close to one of my favourite villages, Parwich, which is a lovely place to be. 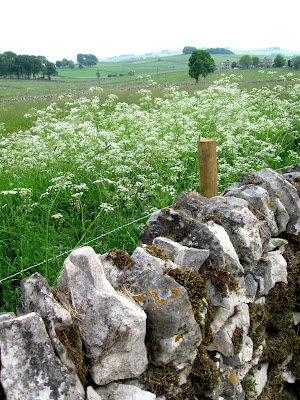 After all the tricksy stuff to do with legs, hitches and jockey wheels was sorted, the boys and daddy explored the playground while mummy faffed around for half an hour making it feel a little cosier. 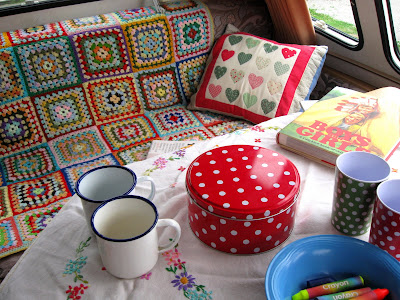 And oh and I loved this bit so very much; playing house with all the bargain treasures and useful bobs I've been gathering up. 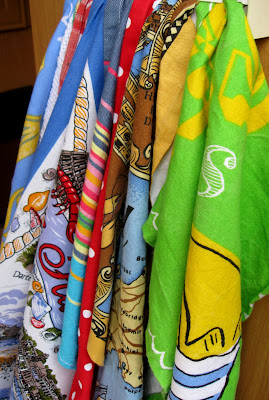 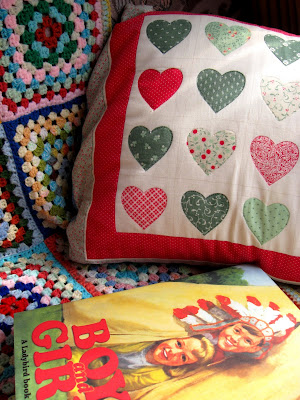 Come early evening our little men were beside themselves with excitement about getting their beds ready, which lasted all of five minutes when they were in them so it was back to the playground for a bit more whooping and whizzing about until dusk. 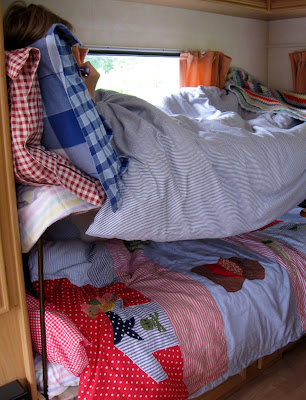 I don't think our two have ever stayed up so late before, it was after dark when silence finally descended and we got some sleep. And we would have had a lovely old lie in if it hadn't been for the terrific thunder storm that woke us all up at dawn with violent rumbles and hammering rain. But oh was it cosy tucked up in our bav, I've never been more pleased not to be in a tent let me tell you! 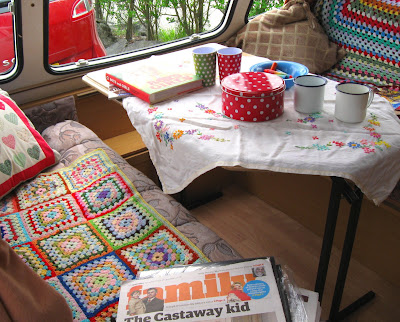 I think the morning was my favourite time, the four of us curled up under duvets, chatting and laughing. A cup of coffee and a bacon sandwich would have made it perfect but this was a definitely a trial run and we've got a list as long as your arm to sort out ready for a next trip in a couple of weeks time.

What a thrill (and a relief) to finally be mobile. There'll be no stopping us now!
Posted by Curlew Country at Sunday, June 06, 2010

Looks like its straight out of the Cool Caravans book - you lucky lady :)

Sounds like fun! I have great memories of childhood caravanning holidays and I expect your sons will too!

I stayed at the same site 2 years ago for 2 nights and I didn't really like it, farmers fields are much more me too!

The caravan looks lovely and homely!

...and it does look so cosy Steph.

Glad you had a lovely time away and...here's to next time and maybe even a farmers field?

o.k. this is about the coziest little nest I have ever seen! I want to just pop in and have a little nap!!! wonderful job decorating!!

Hey Steph, your sweet little bav looks so cosy with all your thrifty finds, to decorate it.
What wonderful memories the boys will have of family holidays in it.
Here's to many more, spent in farmers fields.

Wonderfully brilliant! That's all there is to say about this!

Aren't you wise to give your caravaning a bit of a test drive and park and sleep, etc.

Pretty wonderful for nature to supply that wake-up call. I imagine that you all must have felt quite cosy inside, yet so near to all that rain that was going on not very far away.

That is a great post. It just looks so cute and cozy with your personal touch. The bunk beds are the best.

A very sylish bav, not a word I've heard before!

Steph it looks perfect, cosy and yes I can imagine me needing to prettify it like you before I could really relax. Those beds look very csoy too.

We had a caravan when I was young and I loved sleeping on that top bunk. It was a Spy's HQ when it was parked at home.

Looks to have been a lovely weekend..the caravan looks really cosy and homely...

lovely lovely!!!! Sooo glad you managed your first trip away in the bav, we had our 3rd trip last wk and am still making lists of things we need or could do with. it does take a little getting used to doing all the caravanny bits like hitching up etc, feels like quite an achievement eh??
Your is looking soooo cosy inside Steph (my boring man will not let me have a table cloth huffpuff), it looks remarkably simlar to ours (a swift challenger)...ahhh I do love all things caravan, i am borderline obsessing really.
Just booked our next trip away in a fortnight, another farmers field to try out (the way to go, def prefer the small CL sites) so am getting all excited again lol and we only just got back from our last trip ;o)
Love your granny blankies ahhh I need to stop waffling at ya sorry!! Am in process of uploading my own pics from our wk away and getting all giddy!!!
xxxxxxxxxxxxxxxxxxxxxxxxxxxx

It looks so cosy - a real home from home.

Oh, I'm a little, nah, a LOT envious! Looks lovely and snug and you have prettied it up nicely. Happy camping!

A Rose Without A Thorn said...

Oh my gosh, you make me so homesick to be back in England. I cannot believe how much I miss it some days. This reminds me of the days with my grandparents. Your children will remember these simple trips as the high lights of their childhood. I know I do! a simple tin filled with spam sandwiches and a flask of tea, heavenly indeed to my young heart at the time!!!! Loved it, Maureen

I love how you arranged your caravan, I own a little caravan too and I wish to personalize it with some little craft... Thank you for posting, your pictures made me dream a lot!

Had to tell you that Im having a serious bit of caravan envy here!! :D
What with Lucy galavanting off in her gorgeous little van, and now stunning pictures of yours bedecked with all manner of lovely eye candy...well, Im quite beside myself and feel a strong need for a caravan of my own!!
Perhaps one day, but in the meantime I will enjoy hearing about your adventures and drooling over your smashing pics!

Looks great, love the crochet blankets. Still not tempted to tow one myself though!

ooh Steph it looks so exciting!!!
I cant wait for our first trip away now I'm a member of the 'Bav' gang too! I think our first trip will be a few years away though as ours needs a bit of work..not as much as I though but some serious sanding and painting!! I love the bits and pieces you've got for it, I'm already hoarding some similar stuff, polka dots and granny blankets just seem made for caravans! ooh its all so exciting i want to squeal like a girl!! lol!
I bet the boys loved that thunderstorm..makes all the more exciting..sorry you missed your lie-in though! x

Hi,
I just thought I'd pop by and say hello as I am a carafan too! Your van looks sooooo cosy. We stayed at the same site at easter, not a bad site but I agree about the lack of views.
Here's to many more happy caravanning trips in the future.
vicky x

Hello, just popping by from Lucy's blog. Your blog is fab and I will be back :-)

We got a caravan last year and it is so lovely.

It is nice to see how you have made it yours and I shall do the same.

We've just come back from a week away in ours, it's such a great holiday with children as they can have so much freedom.
Yours looks lovely and cosy, there's something wonderful about snuggling under the duvet listening to the rain drumming on the roof.

Having read Lucy's recent post on camping with her caravan and now your post, I confess to wondering if I might enjoy it after all. It has never appealed to me (I don't like the idea of having other caravans, tents around me) I think that if I found a quiet little campsite I would probably like it. I know that my daughter would. You have made the interior look very pretty and cosy. You chose a lovely area to visit.
Have a lovely weekend
Warm wishes
Isabelle x

I am GREEN with envy...your "bav" looks utterly wonderful and just imagine all those wonderful childhood memories you're building for your boys,

It looks so very cozy! That's a great way to travel!