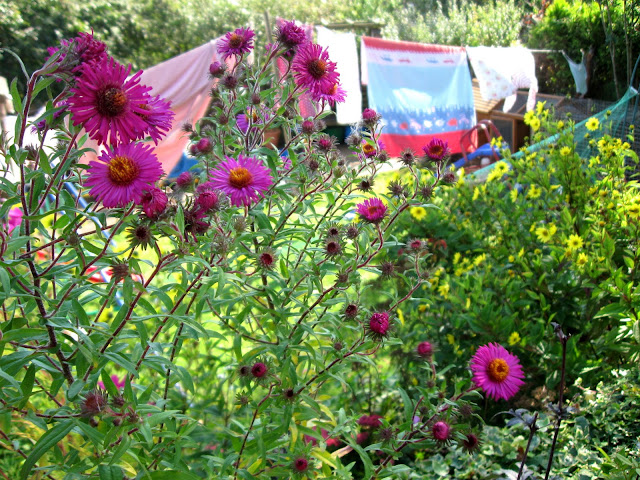 It definitely feels like summer outside this week, but there are plenty of signs that we're already well into the season to follow. It was hot and balmy this afternoon but while I got some gardening jobs done I realised that the sky was rather still and very quiet. All this dreary summer long the housemartins, who nested above our bedroom window, have flitted in and out as they raised their four broods and every sunny day the skies over the meadows were thick with birds chattering and calling to each other.

But now they've gone. Off again for another year, maybe heading out across the Channel or pausing down south for a pit stop while the sun shines again. Driving past the farm yesterday there wasn't a swallow left sitting on the telegraph wires. Susan Hill likens the arrival and the departure of the swifts as "hidden apostrophes around the summer" as most are gone by the second week in August. The housemartins though stretch the season on and it seems strange that the week summer finally reappearred, they have not. 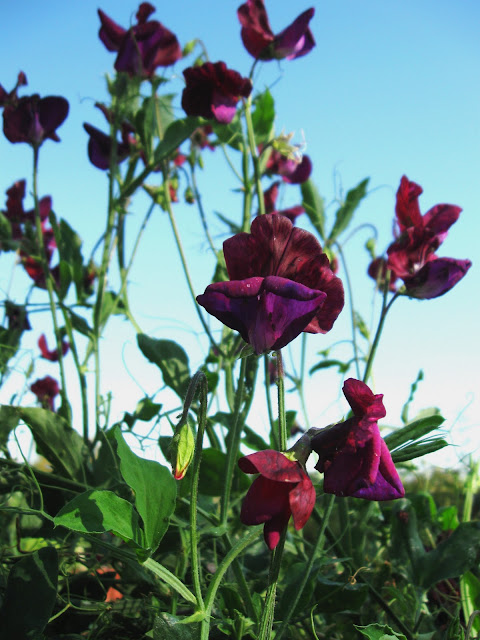 My Sarah Raven sweet peas have been a roaring success this year. The scent from this dark mix I planted in a half barrel on the patio are so heady that it carries on the breeze and into the house. My only problem with them is that once they're in a jug they can look rather sombre without all the greenery. I've mixed mine in with other flowers but next year I think I shall plump for the brights mix instead. 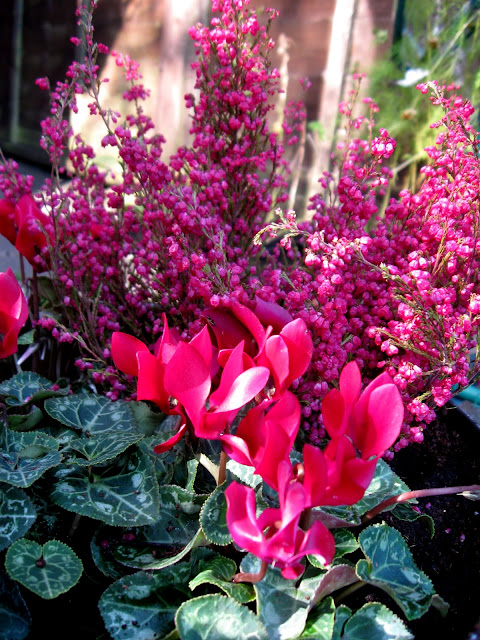 Another sign of Autumn despite the tempreatures. I've spent the afternoon potting up crocus and narcissi for a lovely show by the doors early in the spring. While I was at it I put these sweet cyclamen and a pretty heather in a planter for some colour for this season. I'll add a few more I think and in a month or so I'll pile up some gourds we've been growing and a pumpkin or two on the doorstep. 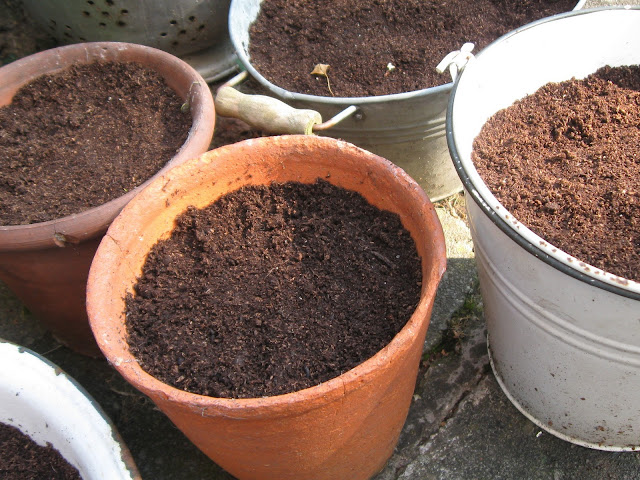 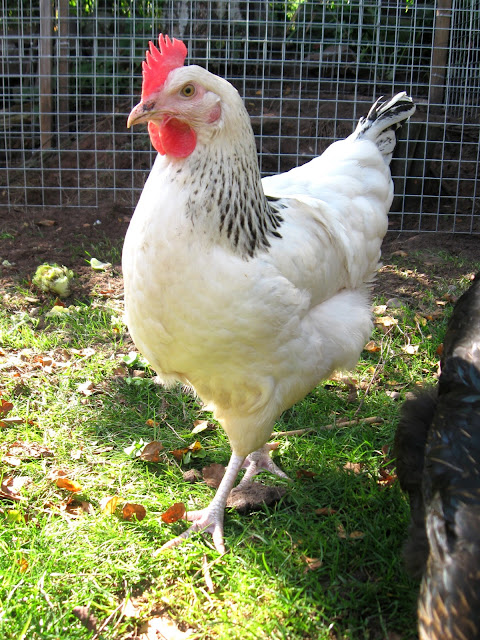 ﻿Florence in the garden
The hens have really matured now and we're finding two or three eggs a day, the boys are besides themselves! Plenty of arguing goes on everyday about who's turn it is to check.

Autumn flowers are filling the garden with late colour and the bees are having a field day. Helianthus Lemon Queen (I think, it came from the WI with no label!) is a real favourite of mine. I should have staked it really I suppose but I do enjoy the way it weaves and waves around. Last Autumn I split it and now it bookends my patio border and I get a lovely view of it from the kitchen window with pots of dhalias behind. 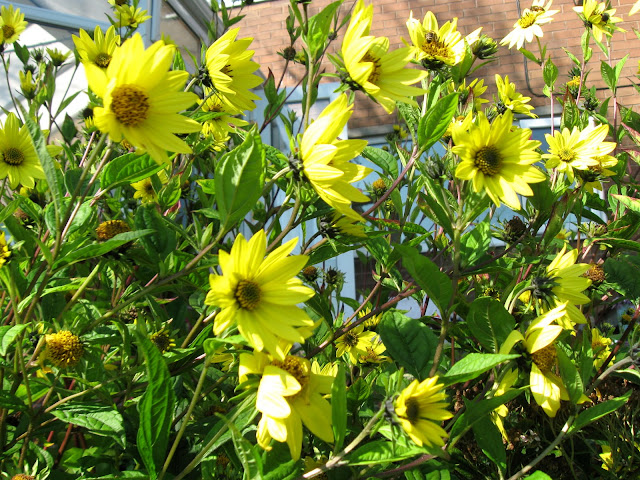 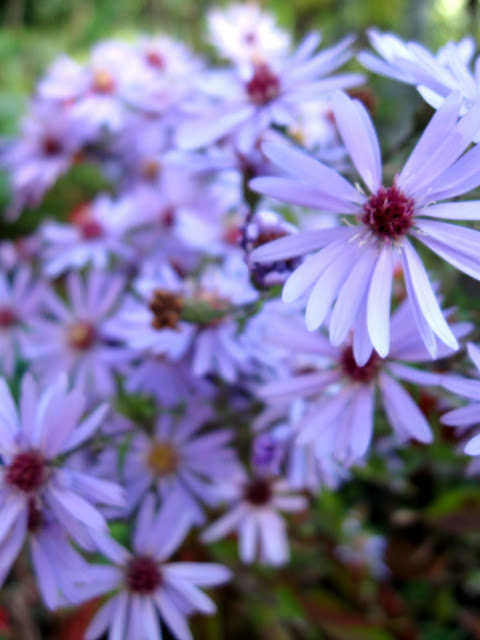 I've added lots of asters to the garden this year. I think ideally, if I had the space, I'd indugle in a big prairie scheme but with fewer grasses (not so mad about those) but in our little patch I'm adding asters and rudbekias where ever I can manage to fit them. 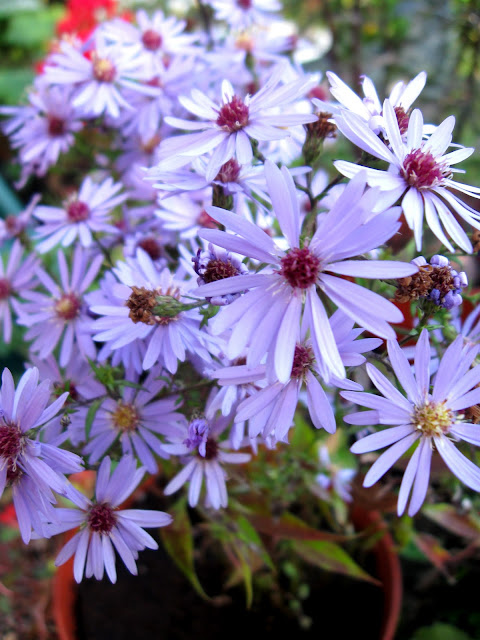 This lovely plant is Aster Little Carlow, I've been wishing for it for a long time and found one at the Chatsworth Plant Fair a couple of weeks ago on an afternoon out with my sister. 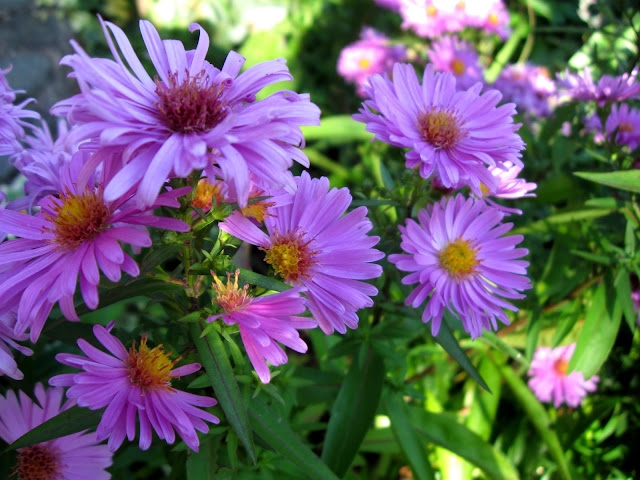 Not sure which this is, it was the only flowering plant in our garden when we arrived and its a very lovely thing. There's something so simple but perfect about asters. I love the colours and the way they wave in the breeze and look fantastic in this low, golden late September light. 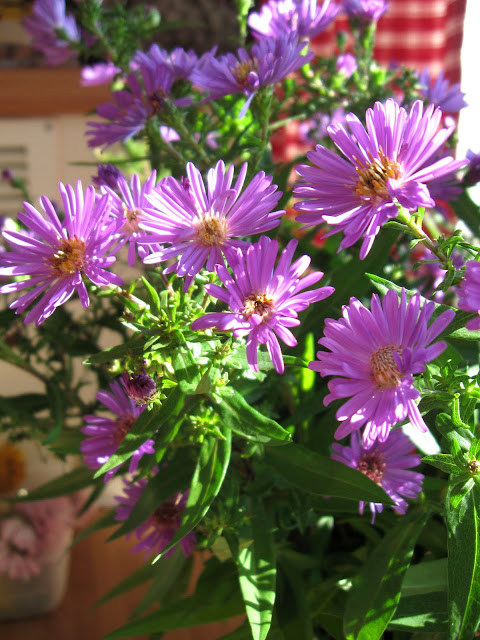 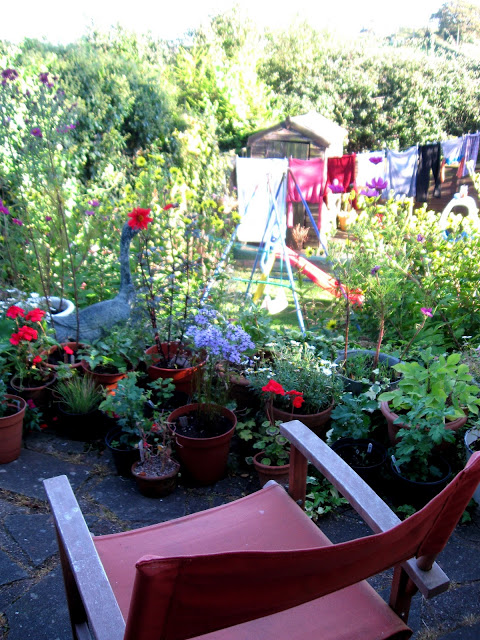 Talking of which, the sun has just set. 7 o'clock and dusk outside already. I can hear a tawny owl calling from the wood. Must go and fetch that washing in and put the hens to bed. Night night.
Posted by Curlew Country at Wednesday, September 28, 2011

It may be the end of September but it is lovely to see so much colour in your garden. It is strange the way we are having brillant sunny days, the hottest day this year in Dublin, and it gets dark so early.

A lovely post with lots of super photos.I sat in the garden here in North Wales and it was 28 but we were chasing a sunny spot.We actually had condensation on the outside of the window this morning because it was colder inside than out!

Your garden looks so lovely Steph - I wish I could be half as proud of mine.

It was absolutely gorgeous here today (all week) as well. Though I have to agree the swifts are long gone here, but we did spy swallows at the weekend, as close to the sea as they could possibly get so I think they were having a one last fly fest - stocking up to make it across the channel.

What lovely asters. I do like a nice daisy flower, as my Granma used to say :)

I've really enjoyed seeing the flowers in your lovely garden. Something about gardening just soothes the soul. Thanks for sharing.
Anne xx

what a lovely blog

That Florence is a beauty!

I shall rethink my opinion of Michaelmas Daisies and maybe even get round to some bulb planting..

Such loveliness this autumn - what a difference the sunshine makes!

You have inspired me to get some bulbs and winter colour potted up despite the heatwave! I love your garden - mine has barely any colour at this time of year. Note to self to buy some asters come the spring!
Thanks for sharing your gorgeous garden.

That looks like a free to go where it pleases Hen Steph. How's the garden faring so far?

You've given this feeble gardener some great ideas with your bulb planting, heather and gourds ideas. Thanks for that, always a pleasure to see your garden.

Gorgeous photos (as usual) and lots of inspiration. I've never given asters much thought but I'm now convinced I'm definitely in need of some.
I wonder if I wish hard enough some will appear?I had seriously pumpkin-coloured-cardie-envy after your last post and spent the evening bemoaning how I never find anything so lovely in my local charity shops. The following day in town, what do you think was hanging on the rail of the first shop I went in?..in my size??..for £3.00!! I am now just waiting for the right weather to appear.

What a lovely, almost poignant post. Last week I saw rows of martins on the telegraph wires. The window is open just now and you're right - I think they're gone.

Your asters are looking spectacular and you've given me a reminder to go and treat myself to some bulbs.

Have a great day Staph.

Seeing your pictures of the Asters has reminded me of a garden I knew in my childhood, so many happy memories, thank you for reviving them. Your pictures and your garden are lovely.

It does feel strange having such nice weather when we're practically in October, we were outside all yesterday and it seemed so funny to have to brush the fallen leaves off the sandpit for T to play with it. Plus all the washing was dried, theres nothing better than getting into a freshly made bed when the sheets have been blown dry. I do love the nice weather but i'm a little annoyed my new autumn wardrobe isn't making it's debut! Your garden is lovely, a great place to sit and relax :) K xx

Your garden is so pretty i love all the flowers,it looks a really lovely place to sit x

Such a beautiful post! Your garden is still full of colour. Love your purple sweet peas and those asters. You have been very busy too. My bulbs are still in their paper bags....

Your photos are always so beautiful. I really need to invest in a camera, I only use the camera on my mobile phone.

Would love to eat a freshly laid egg, they must taste delicious!

The golden glow is lovely. It reminds me of school and 4pm hockey practise. Your garden is a treat and homely. Our sweetpeas are just coming out and so far they seem to be one colour! I do hope not.

i just to read cosy blogs written from England. i was visiting at the Lakes in spring time and loved the holiday so much. i must have a cup of tea soon and look through your blog posts, your photos are so lovely.

Hi Steph - Absolutely gorgeous blog - we were in your beautiful this time 3 years ago - wish we were still there - I fell in love with the UK & Paris! I really enjoyed reading all about your life there. Beautiful photos! Please feel free to visit me anytime.
Jenny @ French A La Beach

All of these photographs are stunning on this blog, well done!!