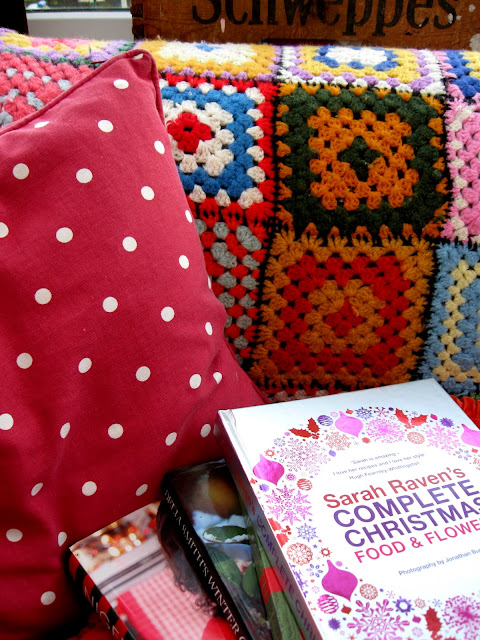 Watching the seasons change marks the rythym of my year. Traditions and rituals of each month and quarter might be small sometimes but I couldn't be without them. This weekend winter took over. The light dropped further, the wind picked up and the air had that sharp, almost metallic, tang to it that can only herald a frost.

We woke to snow this morning. Just a skittering across the tops of the highest hills around our valley and a little on the lawn and rooftops. But defintiely snow so winter has arrived. Along with a stinking cold - marvellous! I've been fighting it off for what feels like weeks but since Thursday I've been properly laid low and spent most of today in bed but I think I've begun to see it off. Oh well, better to have it now than in a couple of weeks time. Just hope no-one else at home gets it. 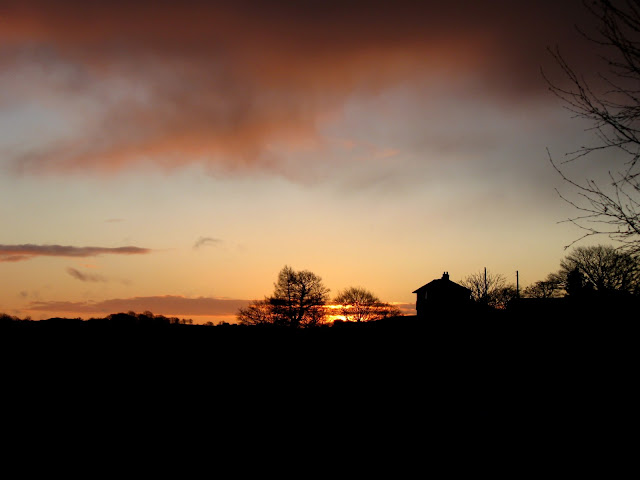 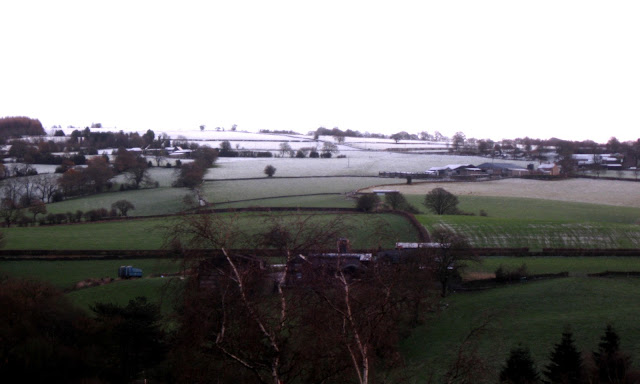 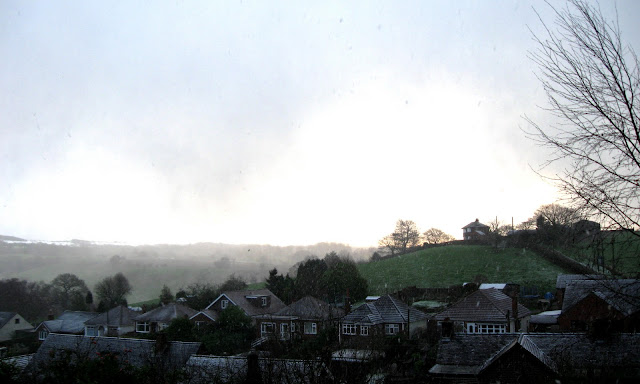 Despite the sniffles we've made a slow start to the festivities at home. There's a colourful tree up in the living room, a few paper chains and lights and some little decorations appearring about the place, just in time for a get together with my sister's family who'll be away in the West Coutnry with in-laws for Christmas. We had such a cosy day full of delicious food, playing with little ones and plenty of chat. Smashing. 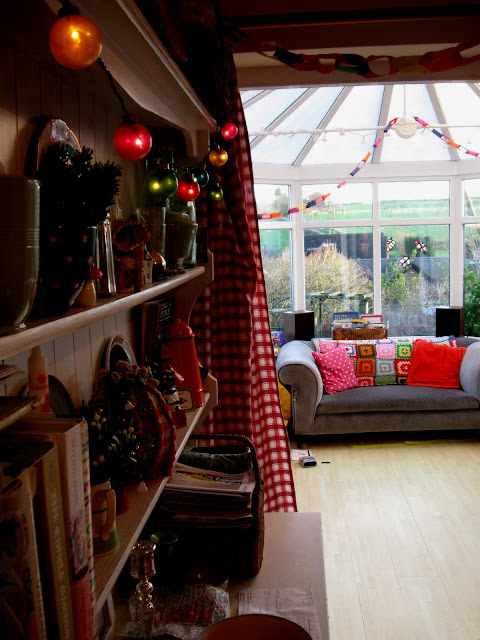 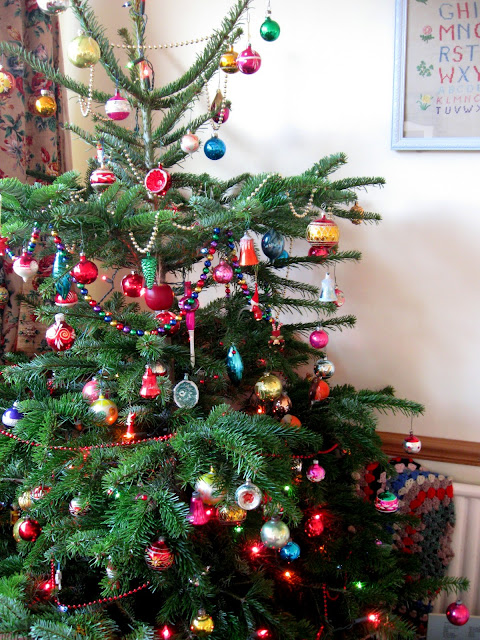 I like a slow start to the festive season. A bit of decorating here, some baking there and plenty of time to savour, enjoy and take it all in. Things all ramp up and get a bit hectic before school finishes so now is the time to try and keep things S.L.O.W 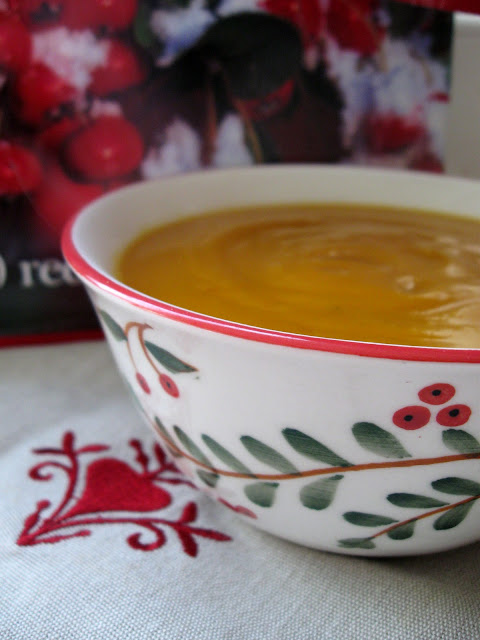 Standing stirring homemade soup is a thing to take your time over I think. Twenty minutes chopping, softening and stirring vegetables full of flavour while watching the birds on the feeders and the snow showers whip across the fields is time well spent. Pumpkin today. 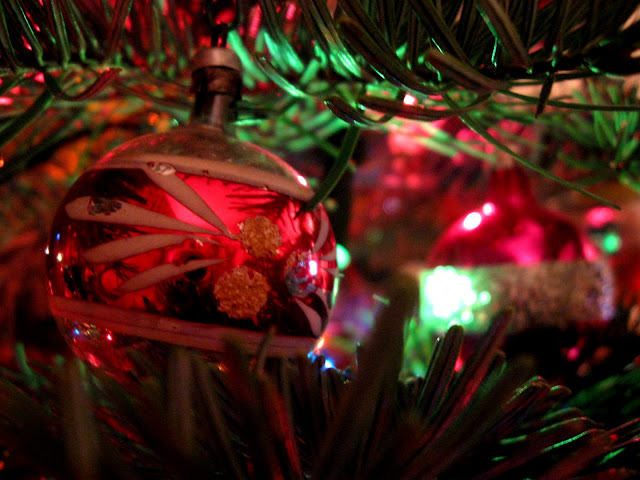 Time now to cosy up under the eiderdown on the sofa, light the fire and curl up with a seasonal read (Miss Read most probably). So how about you? Glad to see winter already? 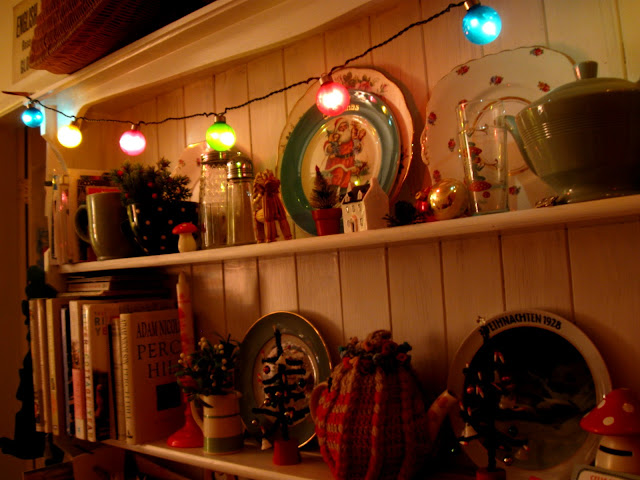 I too love seasonality. Today was very cold, bitter, down here and I was on playground duty. Brr! Our 90 lovely littlies ( all 5/6 yr olds) performed their play 'Humph the camel' this morning and it was great. Now I am ready to start thinking about decorations. Hope you soon feel better - at least you will be well for Christmas itself. Love your gentle posts.

your photos are stunning! what camera/lens do you use?

Oh I so know what you mean my that metallic tang in the air - never quite detected it as metallic, but it is just that when a hard frost is coming. Love it when someone hits the nail on the head like that, thank you!!

I relish the cosying up as winter arrives, candles and open fires and hot chocolate. I just lose it all slightly in February and start longing for Spring. Love living with the seasons though, and savouring them.

Wonderful Winter scenes! So sorry you are poorly,but as you say,better now than when the Big Day arrives.There's always someone ill at Xmas in our family.Last year it was my nephew who had a temp of 101,but still managed to get out of bed and scoff some turkey! Your tree looks very pretty.I love the build up to Xmas,but then after I want to hibernate until the Spring! :0)

Great photos as always. Lovely tree! I decorated my tree today. No snow for us yet, but I'm sure it'll came soon enough.
Hope you feel better soon.

I opened up you blog, today, and....wow! Winter magic!!! =] It's come for you, too, indeed. Today, I was noticing that the light is at a very particular slant and weakness that means I'm supposed to have my Christmas tree and lights up. I thought that I was feeling it too early but, now - it's time!

I love those moments when everything is still and homey - like you and your time making soup! A happy snapshot!

Oops - forgot! Hope your cold is quickly gone and forgotten!!! =]

Your posts are as good as reading Country Living UK -- thank you for posting such lovely things. Your tree is gorgeous! I want one just like it! :)

Beautiful photos Steph, love the different seasons and all that they bring.......

Your home is looking snug and cosy and pumpkin soup sounds like just the thing for the weather.

Hope you can manage to keep things at a comfortable pace before the rush........

What colorful, cozy pictures. Beautiful! Some decorations are up at our house, but still not tree or outside lights. It is humid, high 70's here in Tampa in the early evening. Maybe even 80's. We are promised a cooler spell later in the week. Sometimes we get a damp, bitter freezing snap at Christmas which is just enough to damage all the plants. I am just hoping for some 60's around Christmas. Loved your pictures.

I very much like your description of how the Christmas season is tip toe-ing into your home, complete with a a light snowfall.

Hoping that your cold will tip toe away very quickly.

Your house is truly a lovely cosy winter nest! I adore the wintery pictures from the surrounding countryside too.

I've got the cold too. It's no fun. Hope you're feeling better soon!

Your home looks wonderfully cozy though. Love the cushions.

So sorry you have been poorly and glad to hear you are on the mend. The photos are lovely - especially the banner! And your home is so cosy and inviting it's making me feel all Christmassy. Lovely tree too!
Best wishes
Ruth

such a beautiful winters tale from your lovely part of the country steph x...very heart warming on this rather chilly morning in west country ;0)
we are slowwwww this morning its nearly 8am and half dressed...school run awaits- brrrrr. Sorry to hear you've had the dreaded, horrid cold- big hugs ;0)...love the festivities in your home- sounds like much fun- your tree looks wonderful xxxx

No snow here on the Suffolk coast but its oh so cold.

Going to make a start on festive decorating today - your house is looking lovely :)

As ever Steph you write as I feel. I like a slow start to it all because otherwise I can't savour it all and also it spreads the fun. Beautiful pictures and I want that bowl!!! Where did you get it? xx

What lovely wintery pictures and lovely homely cosy ones too, here with rotten sniffly cold too!

Oh how gorgeous! I wish we could wake up to a bit of snow, no such luck this week! You make it look so cosy and welcoming... I can almost smell the Christmas tree!

Everything is so lovely and cozy! Your tree is beautiful!
I love the change of seasons too. It gives life a very necessary rhythm. But I have to admit that I wish winter were only 1 month long! Happy Holidays!!

What a lovely post, the pictures are beautiful. I hope your cold disappears fast.

its been snowing in Perthshire too. So clean and fresh I love it.

Lovin the decorations. Hope you fight off the bugs real soon.

So many of my favourite bloggers seem to be having snow - I'm incredibly envious!

I love the blanket on your sofa, such lovely colours - and your tree looks grand!

It all looks so warm and inviting Steph, I'm so enjoying seeing everyone's winter/christmas pictures across blogland. Hope you get well soon, us mummies must soldier on! Take care, K xx

A lovely post with stunning photography and words! Your home looks pretty, warm and cosy x

Other seasonal, snuggly books for me are; The Magic Apple Tree by Susan Hill, Where Swans Fly Over by Alison Uttely, A Christmas Carol by Charles Dickens, anything by James Herriot, the Stillmeadow books by Gladys Taber, Winter Solstice by Rosamumde Pilcher and lots of others.
Such beautiful pictures on your blog today - I've just put up my new, reduced-price, Spode Christmas tree plates onto my dresser. Just going out to buy some extra new lights to put around the dresser!
Kay

Love the Christmas tree and the pumpkin soup!!!

Love your tree! I love this time of year too and love a slow start to savor the season. But always, always wish the snow to go away once Christmas is over. Then I want spring to come along and stay for a long time!

oh those photos wer lovely to view ,so calming even though your winter is really here . just beautiful ,i live in a gorgeous country too but oh to see an english winter would be a dream .thankyou .

I've not read a Miss Read book in ages!
They are lovely books! I'll go to the library tomorrow and see what they have!

Your sofa looks lovely and cosy!
I love the spotty cushion!