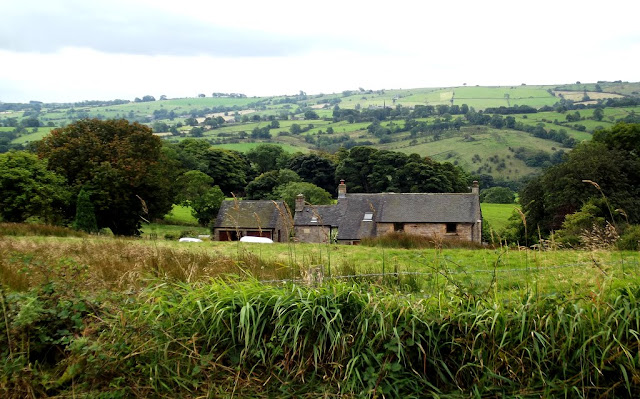 Today was really the end of the summer. After the astounding Olympics, yesterday's amazing closing ceremony of the Paralympics and Anna Watkin's parade - today our biggest heroes of the summer came to the lanes around where we live. The Tour of Britain arrived!
The race has passed right through our village on previous years but today it kept to the high roads around our way and on Thursday it comes back and skirts the city before hoiking up the killer climb of the whole race, Gun Hill, just outside our little market town.

Today was a cheeky treat. Woody and me both took a couple of hours off work and because the boys were in school we schooched up to the tops on our own, scouting out the perfect little farm gateway to watch the riders whizz by. And we found it at Warslow on a long drag so we could hopefully see a bit more than a blur. 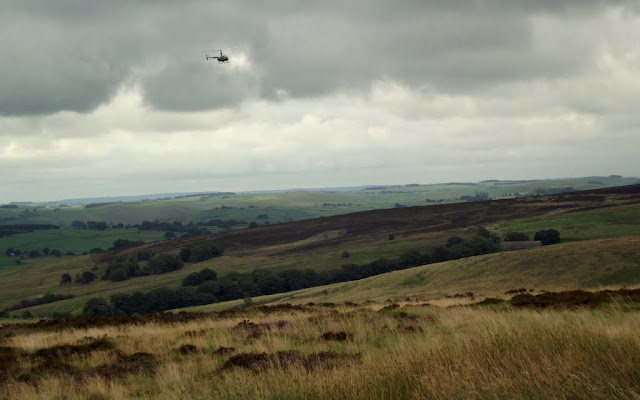 A strong, gusty wind whipped across the tops and the weekend's blazing sunshine was blown far, far away. Low moody cloud scudded across a grey blanket sky but standing above a water-logged ditch with Thor's Cave and the twin spires of the churches at Butterton and Grindon in the distance, waiting for the Tour to arrive, was the perfect place to be.

The build up is so exciting, you can hear the sirens of the outriders from miles away and when the first marshalls in their orange jackets started to filter through the village and with the helicopter hovering overhead, we knew they were close. First a breakaway of six riders and then a few minutes later, there they were - the Sky boys! 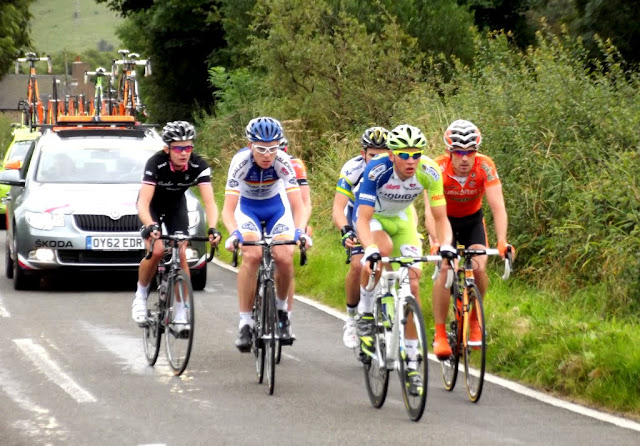 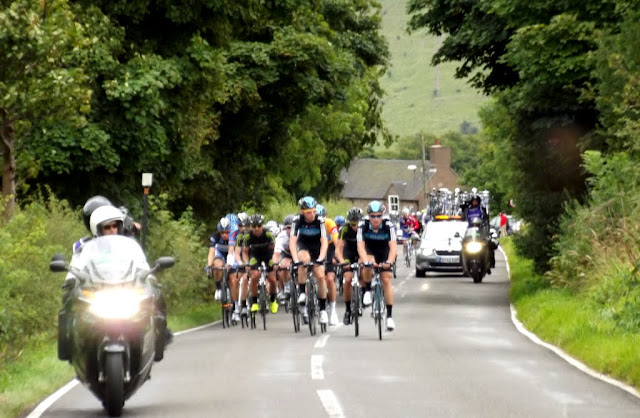 Look - there's Wiggo on the front with Bernard Eisel and Cav, in his white jersey, peeping out behind. Only 40 miles or so in so it was pretty steady here while the climbers battled it out ahead for the King of the Mountains points.
They're gone pretty quickly so we jumped back in the car and nipped up a moorland side road to make it, with a minute to spare, for the summit on Morridge. The atmosphere up there was great, loads of really hardy types, some on bikes and even a Citreon van to lend a continental feel to things. 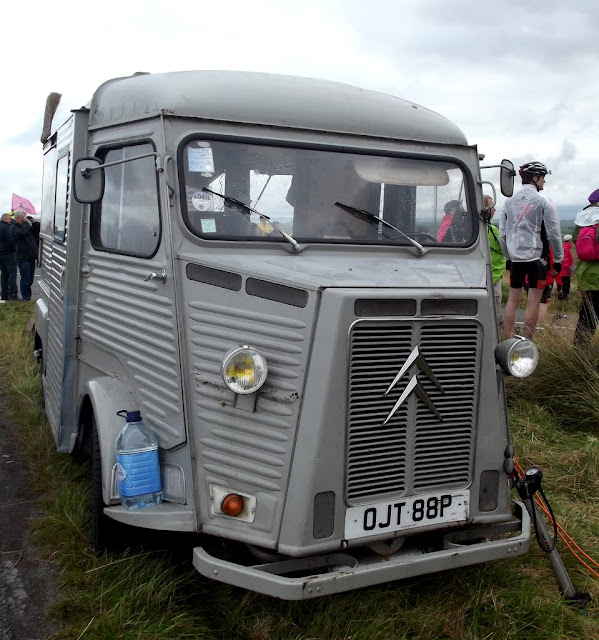 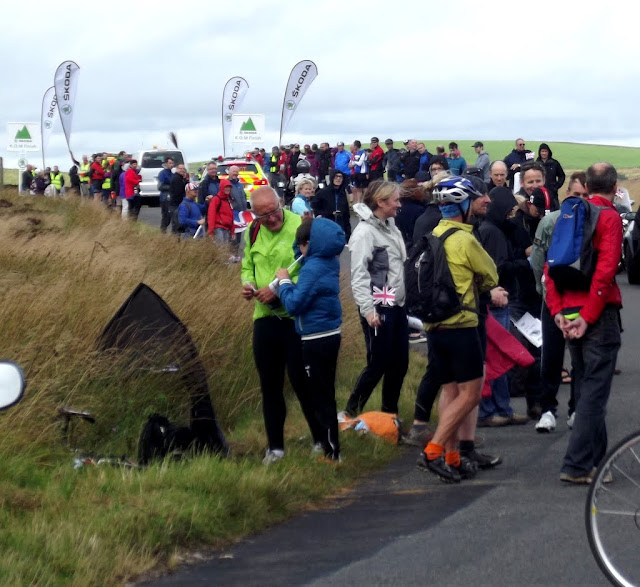 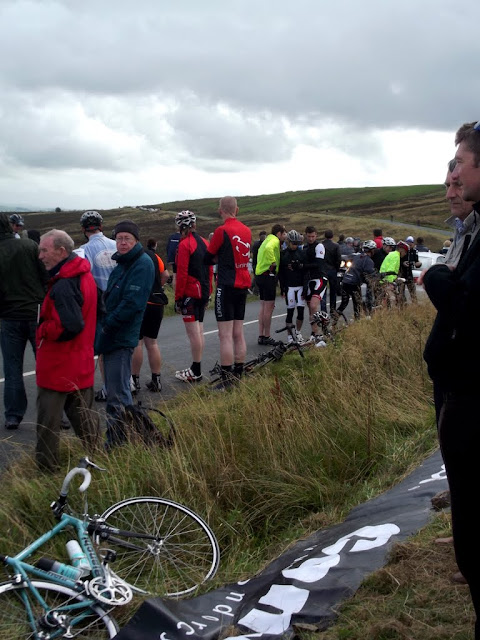 (look they're coming - so cold and windy now so very blurry pictures...)
This time the pace had picked up a bit and with Sky up front I was ridiculously thrilled and we gave them all a great cheer as they came by. To be so close next to your sporting heroes is what makes cycling so fantastic if you ask me. Cav, Wiggo, young Lowe in the leader's gold jeresy, Bernard Eisel, Christian Kness and Jeremy Hunt. 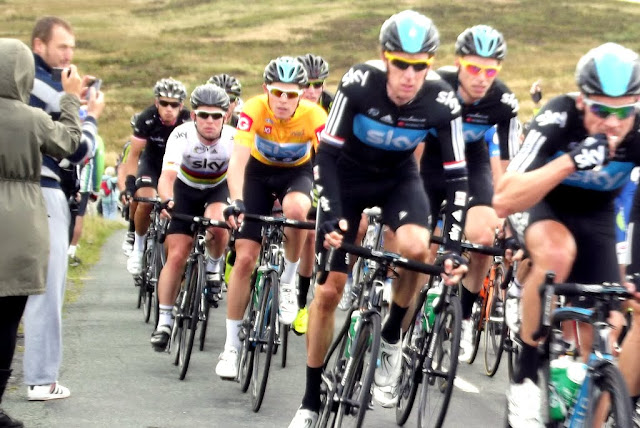 Wow, the guys we watch each summer haul themselves around Italy, then France, onto Spain not to mention the classics and true tests like Paris-Nice etc - up around our neck of the woods! Can't quite get my head around it really - this is where Woody pops out to for a quick spin on his bike?! 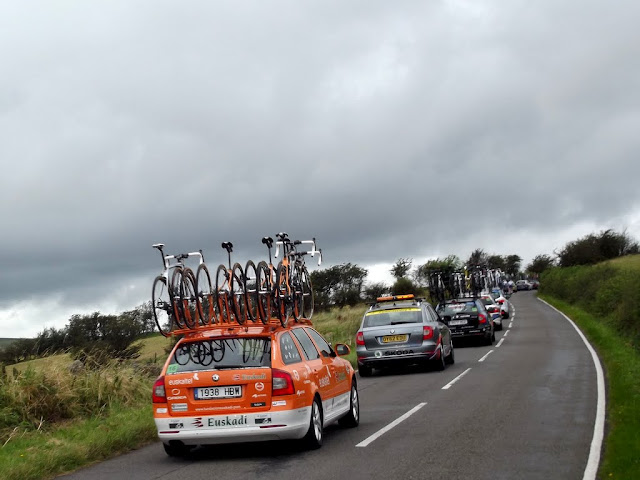 And then they were gone and we were bouncing to be honest. Shame Cav didn't quite make it in the sprint finish at Knowsley but chuffed to bits to have had such a great view and shout our appreciation for a stunning summer. Allez boys!
Posted by Curlew Country at Monday, September 10, 2012

Wow, to be that close. What a wonderful experience. I'll never get the chance to see them up close and personal but I love your photos and I feel like I was there. I love to watch cycling.

We were at Thors Cave in the summer(well, standing in the Manifold Valley looking at it. Couldn't quite summon up the energy to climb up there...) It's all so beautiful around there- love it.

woweeeeeee!!!! what an exciting day!
The skies have turned soooo dark here!, yesterday i had the lights on...I think i'll have to start putting the heating on hehe!, though to save money i think i'll keep getting out the Scandinavian slipper boots and woolly jumpers ;0)x

Those landscape views are amazing!
...and I didnt realise all the extra bikes and cars needed to follow the races- its good to see behind the scenes as so to speak ;0)

I was brought up on cycling and dragged to see races under protest. Never enjoyed it and still don't. Not road racing at any event or cross country. Saw the velodrome at the Olympics though and that was fun.

Oh dear, each to their own I guess.always better to discover what you love best yourself. I feel the way you do about economics! Enough said!

Brilliant pictures. We saw the race on Sunday, in Suffolk and I was amazed at how fast the boys went by. You could actually feel the air move as they passed us.

Fantastic pictures and commentary! Off tomorrow, Friday, to Powis Castle to see the start before they go round Welshpool and then off to more southern parts of Wales. Really looking forward to it and the buzz. Jean

Watched the race this morning through Newtown, so exciting and the guys make cycling look so effortless! Great atmosphere with all the school children out cheering. Loved the accompanying police bikes, outriders, sponsor buses and cars. Worth shivering for over an hour waiting in the chil welsh wind! Jane x

I have no idea what this post is on about but its oh so good to be back here reading your blog as i havent checked in for a while!
I love the way you write about the Countryside, you describe it very much the same as i do, i can tell you love it, isnt England just wonderful?!
Aqeela xx