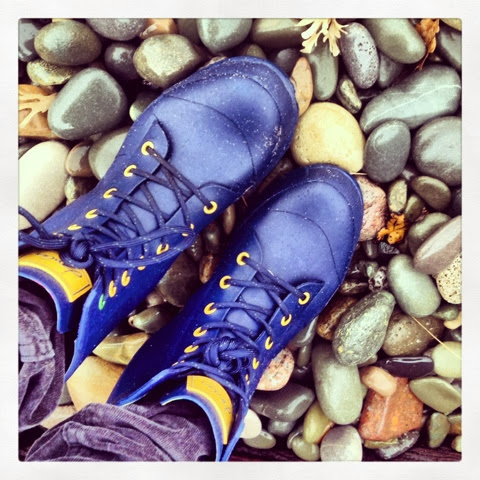 I'm watching the news from Blackpool and the scenes of the battered promenade and along the west Lancashire coast. Stormy seas indeed. On Saturday, after our blast along Rossall Point, we headed into town to the brilliant SeaLife Centre. Rock pools! Oh I love rock pools and we were allowed to gently touch the starfish too!
There was the most enormous crab, an utterly brilliant, ginourmous shark tank and tunnel and a huge tank of fish that live in our northern coastal waters. I thought the whole experience was so excellently done, educational but accessible and tons of fun. Well done SeaLife Blackpool. 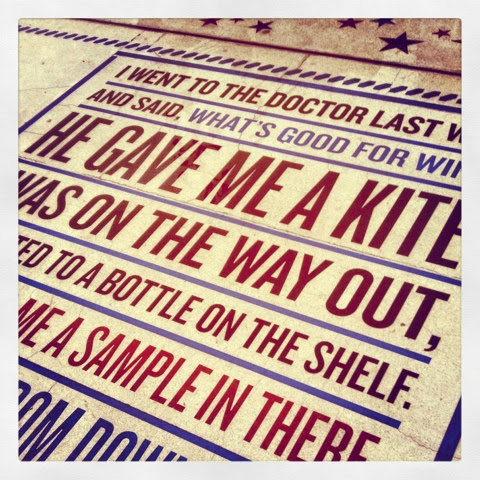 And then after a hot chocolate in a very chic, un-Blackpooly bistro right on the prom (The Beachouse I think, all cocktails, cute snacks & prosecco!) we braved the elements again. 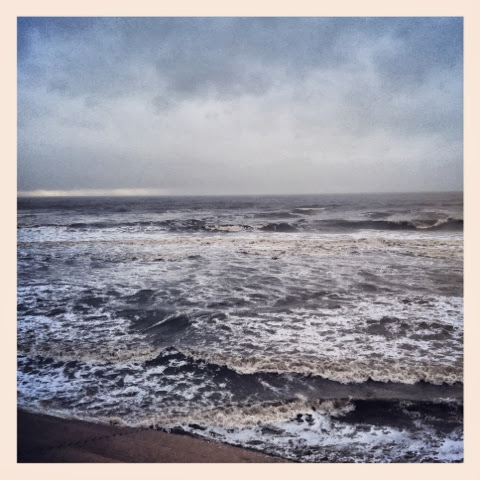 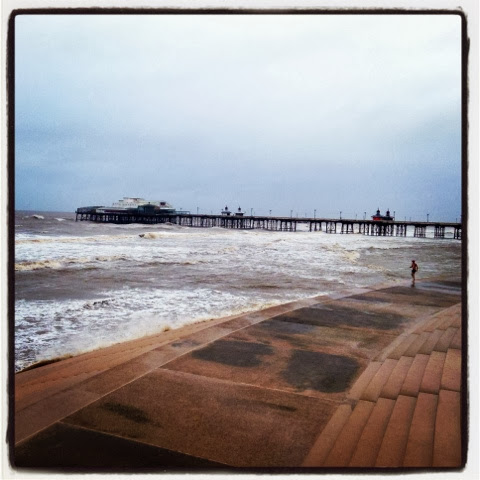 The waves were epic, spewing foam pounding the beachfront. This chap on the right is actually heading into the sea for a dip? Not the best idea, hope he's not gone in today!
Then the very best part of the day. As the light faded they came in tiny groups, heading for the pier head as the gale swirled around. The darker it got the more starlings came and began the swirling, tumbling murmuration I've only really seen on film before. (You can just make them out over the end of the pier).
Turning into the wind and looking up towards the North Pier was amazing. Another, even bigger show was gathering. Every now and again the starlings broke away into a whirling stream that stretched along the water, between the two piers.
These tiny birds swoop so dangerously close to the boiling sea we were sure they'd be swamped and the boys were convinced some had gone under. But nature knows best and they all safely reached their haven to roost together on this wild night. 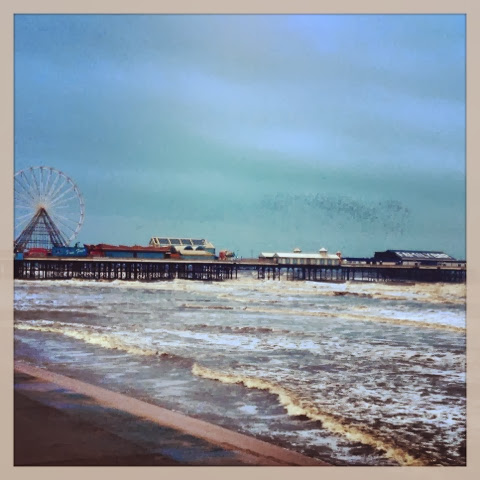 Just spectacular. I'll never forget it. I turned my back (as ever) on the slot machines that whirred and as the prom lights flashed, I watched one of the natural world's most magnificent sights. Unforgettable.
Posted by Curlew Country at Wednesday, February 12, 2014

Wonderful. Last year we had some mumurations that we could see from our front windows. Every afternoon at dusk we would stand transfixed as they swirled around. I could watch for hours. This year they've not appeared, we're so disappointed. I hope you're staying safe and dry where you are. CJ xx

What a heavenly post!!! I just love weather.....this year has been quite something....we are waiting on our next big snow storm...it's the most beautiful winter we've had in years!!!

Fantastic pictures, I'd love to see a murmuration what a treat!

Blackpool is my stomping ground so your last two posts show very familiar scenes. It was certainly wild and windy last night and the area around the Tower has been cordoned off.
Love from Mum
xx

Amazing Blog. Very beautiful. How do you get the pictures to appear on the home page instead of just the writing. I have tried everything but they wont appear perfectly like your. Could you tell me what I should do

Just to let you know, the un-Blackpooly bistro you visited was damaged by the storm on Wednesday, a window was blown in and the interior ruined. The owner is obviously a quick thinker as they have a pop-up restaurant at the football club while the repairs take place.

Oh what a shame. The damage and distress these past few weeks is immense isn't it. Hope everyone is ok and they'll be back to business soon. Hope the pop up goes well and thanks for letting me know.

I was struggling to get pictures to appear in posts the other day. I changed to using Google Chrome browser and that fixed it. Hope that works!

oh, I've just come across your lovely blog from Little Tin Bird's blog and after a quick look realised you're from LEEK! I used to live just outside Leek until 1978, and worked at AdamsFoods for John Adams. I absolutely adored the town and its surroundings and still miss it. I just loved walking around the market place and all the little shops and used to have my groceries delivered (yes really) from that lovely grocers on a corner in, oh I can't remember the street, think it was St Edward St? Opposite the church. I'm going to follow this with great interest, thank you.

Fabulous photographs, as ever. I'm very jealous of your starling sighting!