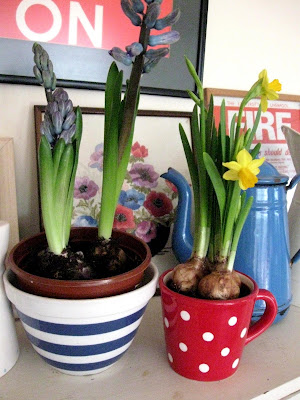 How's your's going so far? It's only lunchime on Sunday but ours is turning out to be a lovely one indeed. Maybe its that the wretched bug has finally got up and cleared off (thanks for all your kind, get well wishes; they did the trick!), perhaps its the glorious sunshine bathing us in light today (after more snow!) or most probably its that I'm doing nothing of enourmous consequence at all this weekend and I'm revelling in it. 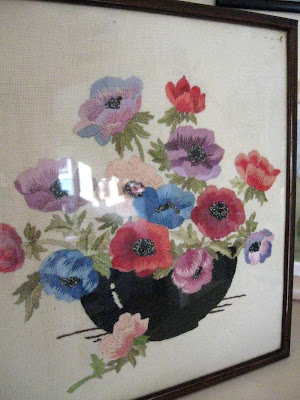 (I finally weakend and bought these embroidered anenomes at the Flea Market)
Yesterday was my out and about day/busy, busy day. Off to town nice and early to pick up mountains of deliciously fresh fruit and veg from the greengrocer and some provisions from the butcher, the dairy and the fishmonger's stalls in the Butter Market. 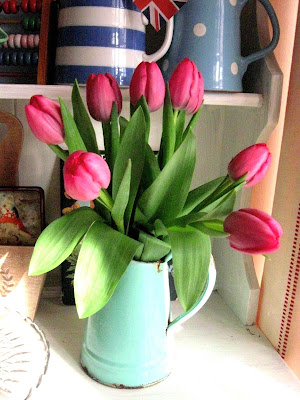 While the boys spent a while in the library with daddy I sneaked half an hour's browsing around the Collector's Market and picked up some beautiful tins (which will need a bit of an assault with the Brasso) and pots of bulbs for the house. 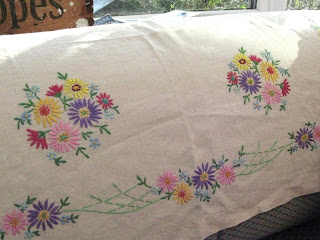 (Thrited embroidered sofa back for £1)
In the afternoon B and I set to on the house (which for now he really enjoys doing so I'm milking it), aired rooms, changed beds and hoovered with a vengeance. Four hours later (!) it looks as smart as I can ever get it and, although it won't last long, I feel friends with our home for the moment. 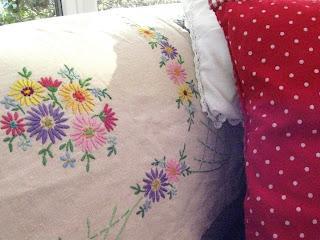 And then last night Woody and I went out - on a date! He's been planning it for a while, something different for the two of us to enjoy, so the grandparents arrived after tea, we kissed two pyjamed chaps (with an evening of fun ahead of them) goodbye and headed off on our own to the flicks! 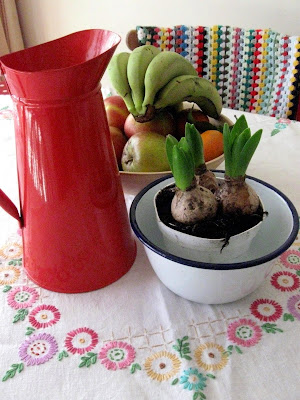 (Thrifted embroidered tablecloth £2)
We've worked out that its three years since we went to see a grown ups film (Ice Age 3 doesn't count). Attached to the univeristy in the city is the small but perfectly formed Film Theatre and we turned up last night at a rather civilised 7.30pm (when we occassionally go out its usually after bedtime so almost 8.30/9pm before we arrive anywhere), took our seats with a packed audience and watched the charming  An Education. It was just our sort of film; moving, heart rending and beautifully shot. And it was the most delicious thing to look at too; lovely interiors, glamorous locations and the most fabulous clothes. 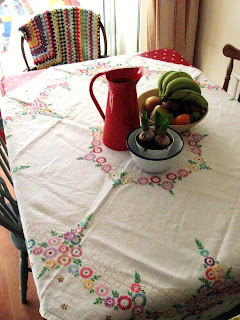 On the way home we called in at one of the village pubs run by some friends and enjoyed a cosy hour or so having a giggle and indulging in a spot of people watching. It really was a very special evening, bless my Woody. Thank you. 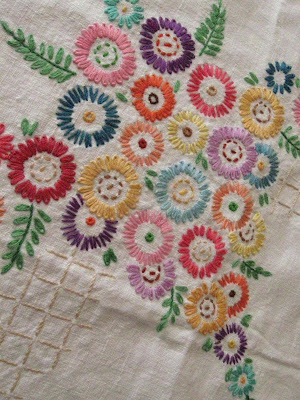 So today has been ultra relaxing, a bit of pottering about with these new vintage finds (which are all very floral because I need flowers to keep me going until Spring), planning some food for later (a roast chicken and veg I think), doing the RSPB Big Garden Birdwatch with the boys, looking forward to curling up to watch Lark Rise later and generally enjoying being at home. 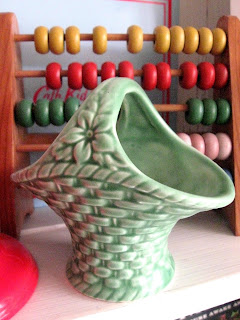 It sounds wonderful and still Larkrise to look forward to!

So lovely! Your pictures are so pretty! What's a grown up film...I have not seen one of those in such a long time!! LOL!

Sounds a wonderfull weekend. I'm looking forward to Larkrise too. Shame its monday tomorrow though :o(

sounds lovely, enjoy the tidiness whilst it lasts.

Hello Steph, it sounds lovely indeed. I do like your floral finds, your tablecloth is beautiful. Better get back to cooking my roast beef, enjoy the rest of your weekend.
Bertie x

All your floral embroidered pieces are so lovely! (I collect them too) And your forced bulbs as well... Such cheeriness in the middle of winter. I watched the preview for the move and it looks wonderful. I want to see that one.

I'm so inspired by the daffodils in the red polka dot mug. I MUST give this a try! What a perfect way to capture the spirit of spring.

Ours has been ok but we've had a double dose of teenage hormones to contend with too :(

Sound like a lovely weekend - I'm sure the sunshine helped! Ours has been good - lunch at the house of an old school friend and family.
Hope you have a great week too.

It sounds a lot like our weekend - and we did the Big Garden Birdwatch today too!

sounds like a gorgeous weekend.. with a great balance of thrifting, housework, family time and then grown up time.. fab!!
charl
x

I went on a date with my husband last night, we have been seperated for 5 months and decided over Christmas to give it another go. It was quite strange but at the same time exciting!

Love all the bulbs, they are my obsession at the moment I have them all over the house.

Fabulous weekend... I am planning a "date" in June... to celebrate our unofficial anniversary of 14 years... gotta plan way ahead... lol

What a lovely post, Steph, sounds like you had a smashing time. I am in love with the embroidered flowers, top finds!
Hen x

Oooh the film looks fab! I know what I will be doing tommorrow evening now!
PS. Some wonderful thrifty finds there, thanks for sharing!
xx

Sounds like a lovely weekend. Just what you needed and I bet the grandparents enjoyed their time alone with your boys too.
Now what is Lark Rise ?
Cheers
Helen

Yes, that does sound a very good weekend, a great way to close out January 2010.

All your pictures are marvelous, and inspire me to get some flowering bulbs in the house, and to get going with some embroidery.

And...I do applaud your choice of film. I really found it a good movie, beautifully cast and acted, and quite a commentary on what it was to be a bright teenager just on the cusp of the 1960's.

sarah-jane down the lane said...

Sounds wonderful, so glad you had such a lovely time. All the floral things are so sweet and just what's required, I quite agree. I also had a purge with the hoover, so by the time I sat down to Larkrise I felt I had earnt it!

Have a brilliant week Steph,

Love all the embroidered linen. I picked up some last time I was over there for a holiday. It sounds that you had a great weekend.

I'm happy to hear that the awful bug has gone. You will be all pleased about that.

I managed a bit of thrifting therapy too this weekend.

You're PICTURES of the flowers are helping me get through to spring. = ) We won't even see crocuses till the end of March/beginning of April. You seem to have spring in your pocket.

When my husband and I went on a date to see the last HP movie, Ice Age 3 was playing. I begged him to sneak in with me to see it but we still had over and hour drive home. We just saw it last week-AHH, and loved it!

I love all the flowers and embroidery. It sounds like you had a great weekend, although if you are like me you probably spent spent last evening blubbing over poor Alf's little brother....here's to a more cheeful episode of LRTC next week

I was going ooohhh oooohh aaaahh all the way through at your fabulous pics and finds. Embroidered cloths made me want to reach out and touch. Great finds.

What a lovely evening - just perfect for having just the two of you time.

Have a great week.

Sounds like you had a really wonderful weekend.
I have one of those Sylvac baskets, I am going to "pinch" your very good idea and put some small bulbs into it.

oh what a lovely weeked! Rob and I haven't been tot he cinema for ages either...i think Harry Potter 2 was the last film we saw!
I have got some seeds sorted for you-promise to post them to you soon, but up to our ears in a new kitchen at the moment! Our entire kitchen diner is in our lounge-fridge is only a stretch away, hurrah!
Love all your beautiful embroidered cloths.x

What lovely finds and what a lovely weekend. Your forced bulbs are wonderful. I love them but have never had the heart to try them. I will just enjoy yours.
Thanks for sharing.

loving all that floral goodness, I have that embroidered picture, only the bowl in mine is green!
Would love to go to the cinema more often too, but Danny always fall asleep half way through!
Jessx

Sounds like the perfect weekend to me, minus the 4 hr clean! Can't remember the last time husband and I had an adult evening together...sigh! Your embroidered goodies are just gorgeous, you are a lucky, lucky person. Dev x

What lovely photos and flowers. Primroses and pulmonaria in the garden already - wow! We are still waiting for the snowdrops! Anyway, I wanted to tell you that I have discovered a genuine SHETLAND blog for you. It has loads of good links to other Sheltie sites too: www.shetlandmylove.blogspot.com . Hope you enjoy it!

lovely finds, so pretty, it must be so colourful and lovely in your house! fliss xx

What a wonderful weekend, just the kind I like. I collect anything vintage with anemones, I love those flowers. I really like your embroidered picture, a similar one eluded me on Ebay recently...The tablecloth is another beautiful find.

I just discovered the spam box in my email and somehow noticed that I had told you for the "first time" that I love your blog about, oh, ten times or so. Ah, well! This just proves what I've been saying all along, I have a mind like a steel sieve. Sorry about that but thanks so much for responding! Kate